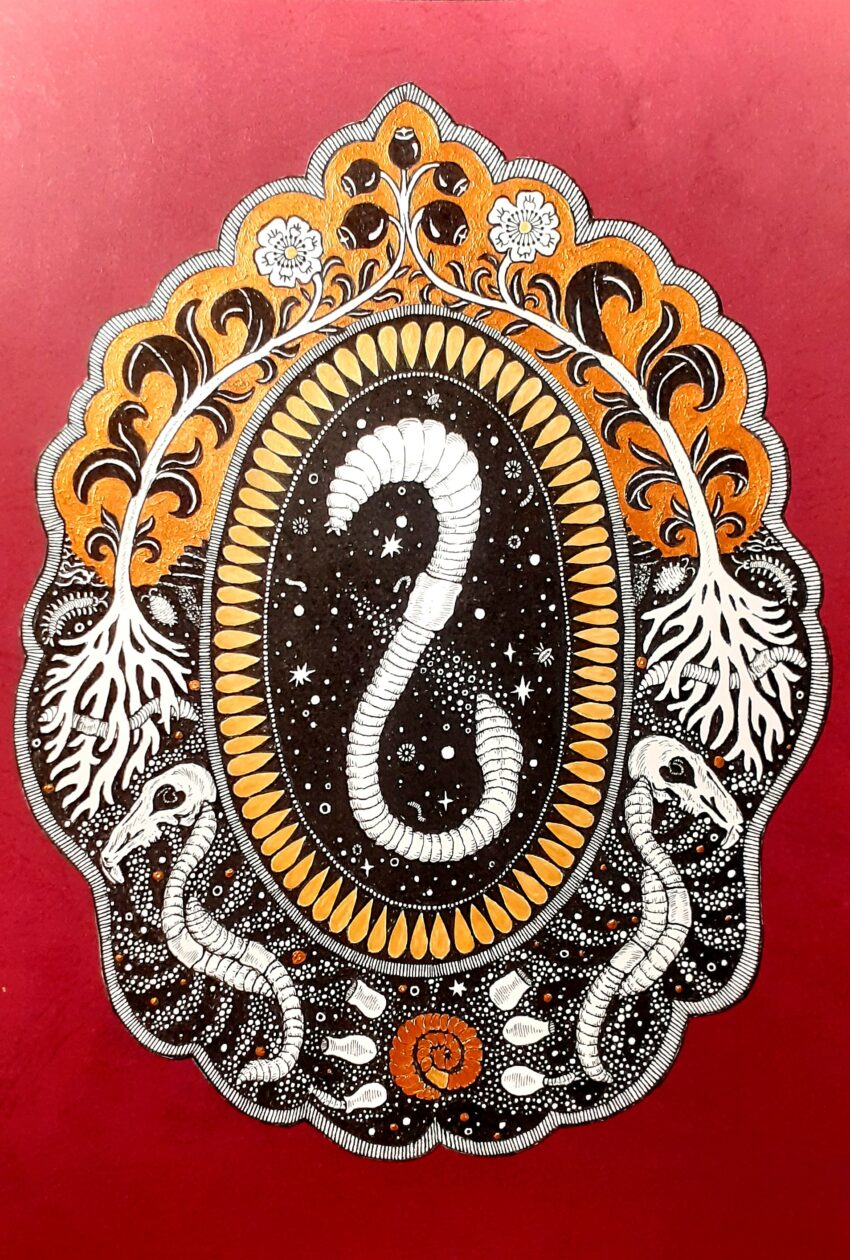 A little story about me, written and illustrated by my friend Joanna

N. has been living in the countryside in eastern Poland for over 40 years, she has a large family and an endless network of friends. She runs her company and has been gardening & studying the soil alchemy for many years. The blood that flows through her veins comes from many parts of the world, but she fell in love with this place and stayed here. She also loves the earth. She sees it as a complex ecosystem that inspires her to act and she is taking it into account in her daily decisions.

If you ask N. what she believes in, what she aspires to, she replies that her religion is compost and her ambition is to become an earthworm. “See, they turn whatever they get into goodness, they fertilize the soil that creates food for other beings.” Imagine being like an earthworm: feeding on everything that surrounds you and transforming it into a new value – fertile land that supports other creatures in their growth. The earthworm appreciates any gift, even if it is shit or the smelly remains of dead animals and plants. “Isn’t that the highest spiritual aspiration to be like an earthworm?” asks N.

Then N. smoothly moves to the heraldry. She tells how often in coats of arms or emblems there are depicted territorial predators – lions, eagles, bears. “Why? it’s all wrong, ” she says. She promotes the idea that, in this place instead of animals invoking force in the physical sense, defense of their territory and predation should be displayed the images of animals such as earthworms, which peacefully transform what they have. These small organisms support the whole of life cycle through their actions, even though their work remain invisible to the naked eye.

N. points out how important in our human world are cleaning and maintenance jobs, which are neither valued nor seen. “These are such important tasks, and because these jobs are now underestimated, nobody wants to do them. As a result, no one is doing it carefully and the machines we use for work, the spaces deteriorate faster as they could, we are all losing because of that” says N. and decides to increase the hourly rate for cleaning and maintenance work in her company.

The husband of a woman who would like to be an earthworm is not hiding his concern. „Everything but an earthworm …” he comments. And then we talk about whether earthworms and other animals are aware of what they are doing, and whether being an aware human is not the best thing that could ever happen to us.

… The subject-journey, everyone will have their own feelings and opinion on these issues…

However, I got inspired by the conversation with N. and her husband. I’m thinking that since I am a conscious person, deciding to act like an earthworm has a lot of potential, meaning and depth. As humans, we have a huge impact on the world around us and other species inhabiting the Earth. The power of our mind allows us to create so much including complex narratives and machines. And we have been using this power for millennia. Our complex stories give us a sense of meaning and identity, but there are too often within them reasons for conflict and wars. Machines help us in everyday life, but how many of them serve to dominate or kill under the pretext of protecting our territory or lifestyle.